When was the worst year to retire historically? Most believe that retiring in 1929, at the Start of the Great Depression would be the worst year to retire in modern US history. This was horrible, with stock market lows of over 89% from the peak on Sept. 3rd, 1929 to the bottom on July 8th, 1932. But, there was one underlying factor that made it not as bad for those with retirement savings and allowed for the recovery of the stock market to come: Deflation. If you had lived through this period, you would have seen the cost of goods drop in 1926 and not return to these levels until 1944. If you had saved and/or maintained a similar paying job during this time, your money would have gone farther, buying more during most of these years.

Now let’s move forward to 1966. If that was the first year of your retirement, arguably you had the worst retirement timing luck in modern US history. From 1966 to 1981, you would have experienced inflation of 7% per year. This equates to almost 3 times the amount of money needed to live the same lifestyle. For instance, if you had retired in 1966 and budgeted $75,000, you would need to spend over $200,000 a year just to keep your lifestyle the same by the time 1981 rolled around!

There are growing concerns of Deflation, with articles citing economists discussing the vicious cycle deflation causes, with job losses leading to more deflation, leading to more job losses and on and on. Nobody wants to see even more layoffs and job losses as we deal with the pandemic. However, as a long-term saver, you should be considering all the risks to your portfolio and, more importantly, what that portfolio can provide for you when you need it. You should balance the risk of loss of principal (losses like earlier in 2020, 2008 or the Great Depression) with the risk of inflation eroding the value of your savings. So how does inflation happen?

Most economics would agree that Inflation can happen in several ways. These can include:

There are many more nuanced factors to consider, but just looking at the list there are quite a few things new in 2020 that add up to potential inflation. We are right in the middle of pandemic that is very deflationary in the short-term. But a concern for long-term investors should be the potential for significant inflation as we look to the future and plan for retirement spending. The biggest concern, in my opinion, is the level of government debt, both in the US and abroad.

What is debt? Simply, it’s borrowing from spending in the future for spending now. Modern governments have always borrowed money, but we are approaching historic levels compared to the size of the economy: 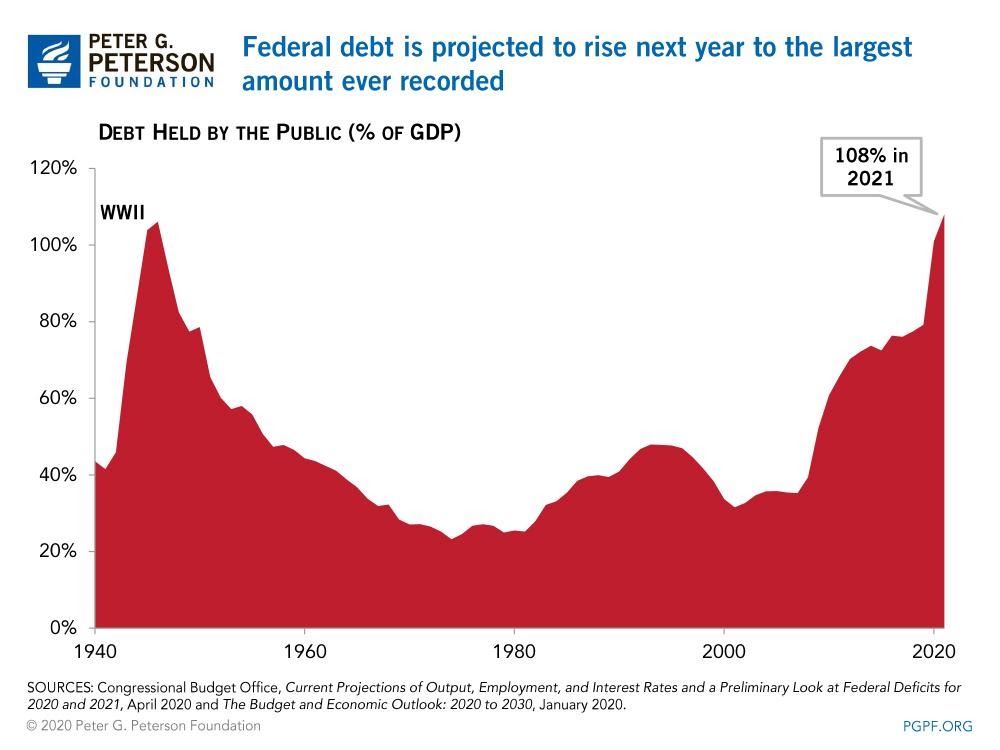 According to the Peter G. Peterson Foundation, Federal Debt is projected to rise next year to 108%, and that is without another round of stimulus that is expected if the pandemic continues on course.

This debt level DOES NOT mean that we should ignore the current circumstances and turn a blind-eye to the economic suffering around the country. But, it does add to the concerns for future inflation and a prudent saver should consider the risk of inflation on their long-term portfolio and retirement plans.

What Do You Do?

Unfortunately, there are no perfect solutions to prepare for an inflationary environment. Everything has trade-offs, but there are some things to consider when you think about your portfolio and retirement projections:

We may be entering a more challenging time to plan for retirement, especially if we begin to experience higher inflation in the next decade. But, with proper planning, you can have a much better chance of being prepared and surviving during this type of environment.

If you want to talk about this topic or anything else, click to schedule an Introductory Call.