We Specialize In Snowflake Employees! Click Here to Find Out More!

Many people who have survived the coronavirus pandemic and ensuing economic fallout relatively unscathed have been focusing on ways to better insulate their finances for the uncertain future. It is natural for us to take current circumstances, both positive and negative, and extrapolate that things will be on the same path into the future. As my dad used to tell me growing up, most people “make decisions assuming nothing will ever change, but you can always count on things changing”.

Sometimes, it takes seeing millions lose jobs just like the one you have, your favorite restaurant closing and possibly never reopening, or retirement accounts dropping 25%+ in a month to make you step back and examine your finances and priorities. For many, the number one stressor is financial insecurity, regardless of income.

There is a renewed interest in Financial Independence for those that can afford to think about it now. Over the next several posts, we’re going to cover the key areas of becoming Financially Independent.

I recently saw an article that talked about the problem with Americans saving at a really high rate, with Credit Card debt reversing course in March and fell further in April. Instead of celebrating this move towards prudent financial management, the media has jumped onto the story of the problem in restarting the economy if people are not spending as much. These articles are intended to cause the reader to “do their part” and spend more money for the good of all.

We are potentially at an historic shift in the US Economy and Culture, which could have significant economic disruption over the next several years. At the same time, it has been known for decades that Americans are significantly behind in financial literacy. For years, there have been articles and news discussing the low savings rate and overall lack of financial preparedness for the median household. The consistent message has been that Americans as a whole need to adopt basic personal finance principles: 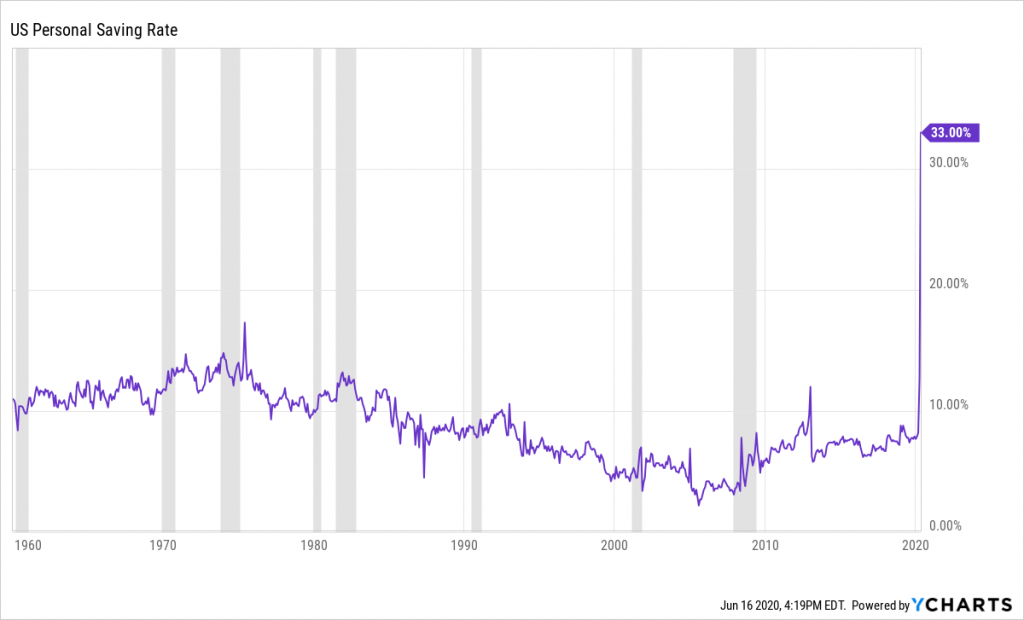 Now that the personal savings rate has increased substantially in response to the pandemic (with admittedly a lot of help from government stimulus), the financial media has changed it’s tune and is discussing the potential negative consequences for the economy with this approach. What?!?

I graduated college with a degree in Economics and there are two main ideas from my professors that I try to remember every day: 1) It’s all about incentives and 2) check your assumptions. Let’s see how these apply to the growing backlash towards high savers from both the media and governments.

Most experts would agree that the US economy is consumer driven, which just means that a large percentage of Gross Domestic Product (GDP) comes from consumer spending. Recent numbers show consumer spending to be almost 70% of the US GDP. When we see a large increase in personal savings rate, it is almost certain that consumer spending is decreasing. So who has an incentive to speak out against this trend? Off the top of my head:

It is completely understandable and rational for these parties and many more to lament the substantial change in consumer behavior. It is in their interest to see consumer spending increase and avoid any slow down. BUT, notice that the consumer (you) are nowhere to be found in the list.

What about “Check Your Assumptions”? If I asked you, do you think those in Media, Government and Consumer-driven organizations have your interests at heart, I would suspect most would respond with some degree of “probably not”. But, when you are constantly bombarded with talking points, advertisements, articles and social media posts that tell you to spend more money, it’s only natural to forget that those entities are not necessarily speaking to your best interests.

Focus on What You Can Control

There is nothing YOU alone can do, positively or negatively, to meaningfully change GDP, tax revenues or corporate profits. Maybe that makes you feel small and insignificant, but I would argue this is freeing. You have the freedom to make the decisions that you want to make, without feeling as though you are failing on a patriotic duty to enrich governments and corporations for the “good of society”.

You, the consumer, of course need to earn and spend some money. For instance, a 2010 Princeton University study found that there is a correlation to making more money and happiness, but only up to earning approx. $75k per year. That should cover all the essentials with room to spare, but once the basics are taken care of and you have a little more to spend on the nonessentials, money isn’t a driving factor in your mood and satisfaction.

We each have our own motivations, but consistently studies find that generosity, being in nature and being healthy (physically, socially, mentally and spiritually) are correlated with happiness and well-being.

Focus on the things you can control that bring you fulfillment, reduce stress, and positively impact those that you care about. At the end of the day, that is how you can “do your part” for society.